Kigali – The government of DR Congo requested for the Rwandan Special Forces withdrawn on Saturday and has been providing the funding for the entire stay of the 357 troops, RNA has exclusively established. 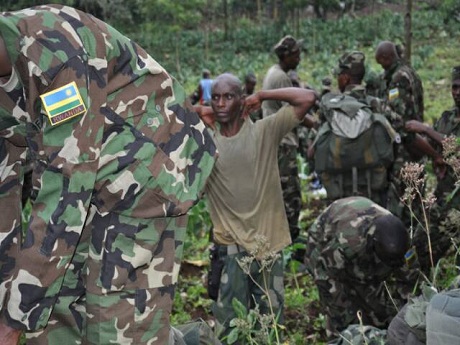 The Special Forces were withdrawn in a surprise move on Saturday – only a day after Defense Minister Gen James Kabarebe had confirmed for the first time publicly that Rwandan troops were in eastern DRC. The two battalions have been based in Rutchuru for the past two years operating alongside two battalions of Congolese Special Forces.

Details emerging from the highly secretive operation, which was ended abruptly by Rwanda on Saturday, show the troops were based in Katwiguru, Kiseguro & Kaunga – all located in the large Rutshuru territory. It is here that Rwandan FDLR militias have been active – also with bases in South Kivu as well.

Sources have confirmed to RNA that the Kinshasa government made the request for the Rwandan troops to boost its capabilities against the FDLR rebels. President Kabila’s government also proposed to fund the entire stay for as long as it would take. The operation has remained secret – and despite hints from several circles, there was never any confirmation from the two governments.

So how much could it have cost the DRC government to maintain the four battalions for the past two years? There are no readily available figures. To have an idea of the cost, RNA will depend on the cost of the two-week Umoja Wetu operation back in January 2009.

Estimates from the International Monetary Fund (IMF) indicate the operation cost about US$7.6million (0.2 % of GDP at the time) covering an unspecified number of troops, but reports said it could have been more than 3,000 troops. The IMF estimates were released in August 2009.

However, for the latest operation, even if the combined Rwanda-DRC Special Forces may have been less than 1,000 troops – the nature of their status means they require significant resources to operate. In terms of monetary numbers, they could have consumed more than the Umoja Wetu operation.

If a two-week operation can cost that much, you could the math to have an idea of the cost of the Special Forces operation covering all needs. And had the operation not been ended, it could have gone on for as long as the FDLR threat remained.

RNA has also been told that it was the Kinshasa government that made the proposal for the combined Special Forces operation. In media interviews however, DRC government Spokesman, Mr Lambert Mende, has vehemently denied the troops were allowed on DRC soil. In other interviews he is claiming they have been there without consent from Kinshasa.

But analysts say the Kinshasa denial is a public relations stance meant for the Congolese – many of whom are shocked their government has been accusing Rwanda of aiding rebel groups, but then it turns out they had allowed the same Rwandans to operate in Rutchuru for two years.

As seen from the photos, the Rwandan troops have all along been dressed in Congolese military uniforms. They changed into Rwandan uniforms after crossing onto the Rwanda side of the border at a high profile welcome ceremony in Rubavu.