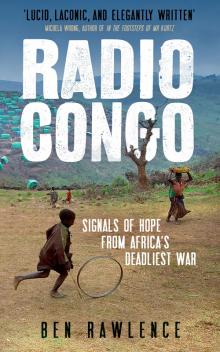 Despite Africa’s increasing economic prosperity and global prominence, media coverage of the continent arguably remains a steady diet of war, rape and disorder. Nowhere has this been more evident than in the stories and narratives we know of the Democratic Republic of Congo.

This panel discussion, which will also mark the launch Radio Congo: Signals of Hope from Africa’s Deadliest War by author Ben Rawlence, will examine the way Africa is represented in the global media landscape and explore the prospects for transforming the reporting of the continent.

Ben Rawlence is a senior researcher on Africa for Human Rights Watch. His writing has appeared in The Guardian, The London Review of Books, Prospect, and The Huffington Post, and he has been a contributor to BBC Radio 4’s From Our Own Correspondent. Ben studied Swahili and history at the University of London and received his Master’s degree in international relations from the University of Chicago.

Shana Mongwanga is a London-based Congolese activist, film director, writer and actor. Shana previously worked for the UK Office of the Jesuit Refugee Service, advocating and lobbying on behalf of refugees and asylum seekers on a national and European level.  In response to a growing frustration and to tackle the root causes of refugee issues, she founded Africa Lives! PRODUCTIONS – a social enterprise, which works with charities, companies and individuals to promote positive social change through the use of film, theatre and the arts. Shana has a Masters degree in Political Science & International Relations and a BA in Law from the Catholic University of Louvain (Belgium).

This event is free to attend; to help us cater appropriately we’d grateful if you RSVP to RSVP@royalafricansociety.org