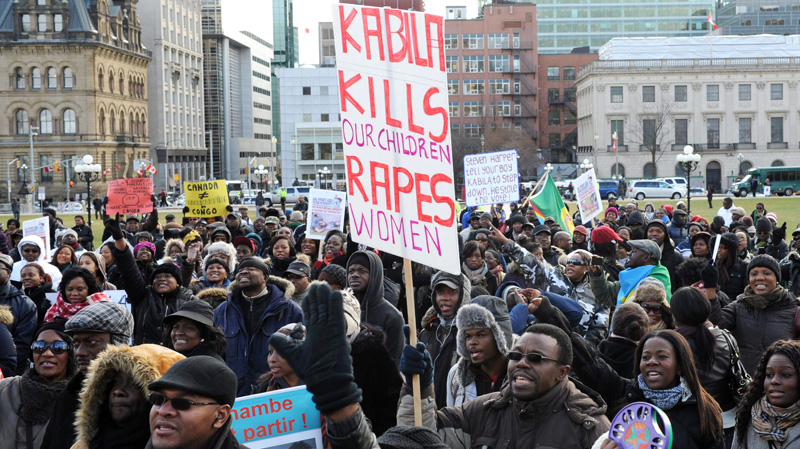 Protesters braved the cold temperatures Saturday for the latest in a series of rallies designed to bring attention to the dangerous situation in the Congo.

Congolese Canadians came from Montreal and Toronto to rally on Parliament Hill, the U.S. embassy and the Congolese embassy with a peaceful crowd of about 100.

They said the -30 C wind chill was nothing compared to the situation in their native country.

« Rape, mutilation, killing, everything, no peace, no nothing, » said Henriette Yakibonge, whose cousin was murdered by rebel forces. « How can you sleep when you have someone call you and say we found your mother without the head, that’s ridiculous, that’s why we’re protesting today. »

Protesters said the man to blame is President Joseph Kabila, recently re-elected in a contest they said was rigged.

They said Etienne Tshikedi is the real winner.

With a number of other protests happening in the last month, Congolese protesters said they’ll continue to rally until something is done back home.

« It does make a difference because we’re making our voices heard, » said one protester. « We’re saying enough is enough, we don’t want (anymore) rape . . . we won’t stop until that situation stops. »

With a report from CTV Ottawa’s Vanessa Lee