Mehmet Dalman avoids ‘leading question’ on controversial businessman Dan Gertler, from whom the mining group has bought interests in the Democratic Republic of Congo. 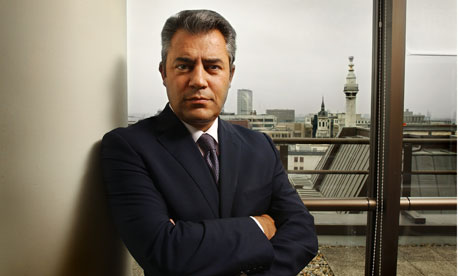 A long-awaited internal inquiry at FTSE 100 mining group Eurasian Natural Resources Corporation (ENRC) has been given added significance days before its scheduled completion by the group’s chairman refusing to endorse its controversial business partner in Africa.

In an interview with the Guardian, Mehmet Dalman – who has been chairman of the natural resources group since February – declined invitations to publicly back ENRC’s co-investor Dan Gertler, an Israeli businessman who has been dogged by accusations that a close relationship with the president of the Democratic Republic of Congo (DRC) has allowed him to buy interests in the country’s mining assets on the cheap.

When asked if he has ever had any concerns about doing business with Gertler, Dalman, replied: « Oooh … You know that is such a leading question I’m not even going to respond to it, right? … Any comment I make, whatever you write down, it will not look right. Why would I answer that question? It is a no-win situation for me. Don’t give me questions that I will look bad on, right? Come on. Be fair. »

ENRC has acquired stakes in mining concessions from Gertler at prices that appeared to deliver the Israeli’s offshore companies handsome – and speedy – profits. Campaigners also argue that ENRC’s purchases were at levels significantly less than the true market value, meaning the company and its partner could have profited at the expense of one of the poorest populations on earth.

ENRC’s reticence over Gertler comes as its board prepares to review the contents of the investigation prepared by law firm Dechert into allegations made by what Dalman describes as « more than one » whistleblower at the firm. The brief is understood to include examining allegations relating to businesses in the company’s Kazakhstan home as well as Africa.

Dalman said ENRC had « retained a law firm to act as an independent investigator on our behalf into these various allegations, » adding: « If we have done things that are wrong or anybody in this organisation has done so, we will take appropriate action. We will be transparent about it and we will put it right … I would be disappointed if I don’t reach conclusions myself and with my board certainly within June. » He said he would hand the document to the Serious Fraud Office if it wants to see a copy.

Gertler, who appears to have a close relationship with DRC president Joseph Kabila, has consistently denied any wrongdoing in the country. A spokesman for his Fleurette Group, which Gertler says holds all of his DRC assets, said: « The Fleurette Group categorically rejects all allegations of impropriety and denies any wrongdoing. To be absolutely clear, the only beneficiary of the Fleurette Group of companies is the Gertler family trust. Fleurette did not acquire mining assets at prices below their real value – this assertion is based on a flimsy understanding of the mining industry and does not take into account the considerable capital expenditure required to bring these assets to full production. The value of these assets is determined by what the market is prepared to pay. »

Valuations on Gertler’s assets have been conducted by independent mining analysts working for investment banks. His spokesman declined to answer how much capital expenditure Fleurette Group had made at the mines, or how it knew it had paid the market prices when a number of its acquisitions have been criticised for being conducted privately.

The dealings between the Israeli businessman and ENRC have previously caused questions to be raised. Last year, Eric Joyce, the MP for Falkirk, published a list of 59 « shell companies » dealing in DRC natural resources that contained 29 companies known to have associations with Gertler. They include two well-known transactions involving another UK listed company, Glencore, which was asked last month by the non-governmental organisation Global Witness to explain what it called the « potentially corrupt deals ».

Scrutiny of deals that the likes of ENRC and Glencore have conducted in the DRC has led to promises of a parliamentary investigation, although Glencore, ENRC and Gertler deny any wrongdoing and insist the transactions were properly conducted.

The issue of who is benefiting from the DRC’s natural resources wealth is beginning to attract the attentions of other politicians. Last month Willy Vangu, a DRC opposition politician, addressed members of the UK parliament at a conference called Secret Mining in the Congo, in which he claimed the country stands to lose more than $5.5bn (£3.6bn) of natural assets and future revenues through secret sales. The country only has a gross domestic product of $13bn yet Vangu used his speech to ask Britain to withhold the £790m aid it has committed to donate to the country over four years.

Pauline Latham MP, a member of the international development select committee, said: « What is all the more concerning for UK taxpayers, seeking reassurances that [UK aid] is being spent wisely, is the involvement of London-listed FTSE 100 firms. It raises the need for a full investigation to get to the bottom of who is benefiting from these deals – are London-listed firms using Dan Gertler and shell companies to navigate around anti-bribery legislation? »

And now for the shareholders…

ENRC faces becoming the latest victim of the « shareholder spring » when it holds its annual meeting next week.

Investor advisory service Manifest predicts the meeting will feature a sizeable shareholder rebellion over the company’s remuneration report. It also believes that investors remain angry about the corporate governance crisis at the company last year, when Sir Richard Sykes and Ken Olisa were forced from the board, raising fears that the company’s Kazakh founders were trying to consolidate power.

Sarah Wilson, the chief executive of Manifest, believes the detail behind the remuneration report could irk shareholders. « The remuneration report is not complicated [to compile]. If you don’t judge that right, what chances have you got of getting other aspects right? I’d guess that there will be dissent of 25% to 30% » she said.

Manifest has warned its subscribers there are low hurdles for executives to qualify for long-term incentive plans. Wilson added that shareholders often prefer to register protests on « impersonal » issues such as remuneration, rather than against specific people.