Bell Pottinger, a UK Public affairs & lobbying agency, is still representing Joseph Kabila and his government. Congolese Women Activists in UK urge Bell Pottinger via its Chairman Peter Bingle to:
– Apologize to Congolese for this unfortunate partnership between Bell Pottinger and DRC government
– And initiate a process of monetary compensation to the women victims of rape in the eastern part of DRC as this tragedy was largely ignored by the media around the world and this suggested that there was a well organised public relation campaign to clean the image of Joseph Kabila and his government when the women were used as a  weapon of war by both side during the fighting

-It is true there was a demonstration that took place outside of Bell Pottinger office at Holborn in central London on Wednesday the 28th of December 2011 which was organised by a group of Congolese Women.

-It is also true that the demonstrators made claims that the PR company Bell Pottinger and, including its Chairman are linked with and representing the Congolese government and Joseph Kabila. The choice of Bell Pottinger’s Chairman Peter Bingle as a focal point of protest is because he is the figure head of the company.

-That is where the truth stops.

Some claims the organizers of the demonstration are challenging:

-“Bell Pottinger does not work for President Kabila; for the government of the DRC and did not work in any form on the recent election in that country.  »
-« Peter Bingle has never worked for the DRC or any other African government. Bell Pottinger Public Affairs (BPPA) focuses on UK and EU public affairs matters.”

The women are saying:

-This is not true.

-Bell Pottinger has been involved in DRC government headed by Joseph Kabila who is a brutal dictator.

-Bell Pottinger has not released any statement saying they have dropped Joseph Kabila and his government from their list of clients nor explained, if indeed that is the case  Why, How and When it happened.

-Therefore for the Congolese in UK, Bell Pottinger is still representing Joseph Kabila who has killed, through its military machine, 24 people in the post-electoral period as recorded by Human Right Watch. (http://www.hrw.org/news/2011/12/21/dr-congo-24-killed-election-results-announced)

-This article shows the involvement of the PR company in DRC “…press release on: Brinkley Mining notes the statement issued to media by Bell Pottinger today quoting a member of the government of the Democratic Republic of the Congo (« DRC »). This statement appears to suggest that Brinkley Mining’s agreements with the Democratic Republic of the Congo’s (DRC) atomic energy authority, the Commissariat General a l’Energie Atomique (CGEA) will not progress.” (http://www.miningweekly.com/article/company-announcement-statement-re-drc-2007-10-08)

-Bell Pottinger is linked to many African regimes such the Gabon government as this article shows: Bongo and Bell Pottinger can’t stir voters in Gabon

“It comes after the government hired the British lobbying firm Bell Pottinger to rebrand Gabon as a vanguard for the protection of rainforests.” (http://www.independent.co.uk/news/world/africa/bongo-and-bell-pottinger-cant-stir-voters-in-gabon-6278295.html)

-Bell Pottinger is involved with government beyond UK and EU:

“The BBC’s Sinhala service’s Chandana Keerthi Bandara says that Bell Pottinger has made no secret of the fact that it has represented the Sri Lankan government.” (http://www.bbc.co.uk/news/mobile/world-asia-16051177)

-Bell Pottinger said “Bell Pottinger has contacted the organisers of the current campaign against the DRC election result to understand why we have been implicated but has yet to receive a response.”

Bell Pottinger has never contacted the true organizers of the demonstration who are the Women Together for Peace. Maybe they have contacted their usual contacts within the Congolese community or a particular political party or a community organization that they are comfortable dealing with. They should have done their homework first than claiming they contacted the organizers and received no reply.

–Bell Pottinger said: “We continue to seek a dialogue with that group to bring this matter to a close.”

This is a great move by Bell Pottinger to seek dialogue with the group to resolve the matter as more demonstrations are planned in the near future targeting the PR Company.

But this dialogue would be extremely difficult if Bell Pottinger via its Chairman Peter Bingle does not publicly acknowledge:

1.      Representing the Congolese government when it was oppressing its own citizens;

2.      Apologize to Congolese for this unfortunate partnership between Bell Pottinger and DRC government;

3.      And initiate a process of monetary compensation to the women victims of rape in the eastern part of DRC as this tragedy was largely ignored by the media around the world and this suggested that there was a well organised public relation campaign to clean the image of Joseph Kabila and his government when the women were used as a  weapon of war by both side during the fighting.

These are some of the articles showing Bell Pottinger link to DRC:

Some proves of Bell Pottinger’s Involvement in The Democratic Republic of Congo:

· Bell Pottinger with the Katanga government

“The South African national was expelled amid allegations of fraud and other crimes in his home country. Although he denied he was deported, the Katanga provincial government, based in DRC, used Bell Pottinger to release a statement, confirming Rautenbach is now a ‘persona non grata’ in the country.”

However, in a statement released by public relations firm Bell Pottinger, the government said that it had determined that the agreement between Brinkley and the CGEA did not meet “the highest standards of integrity”. 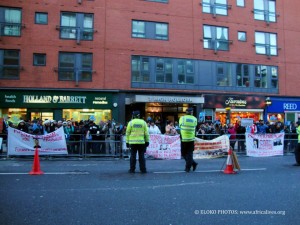