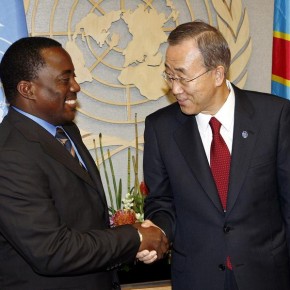 Feb. 8 (Bloomberg) — Democratic Republic of Congo’s gold output is set to surge as record prices and the end of Africa’s biggest war prompted production to restart in some of the continent’s most remote regions after more than 50 years. 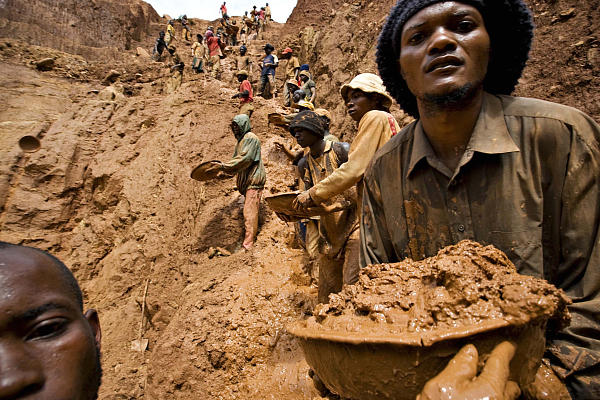 Commercial output in the central African nation could reach 1 million ounces annually in the next five years from close to zero, AngloGold Ashanti Ltd. and Mwana Africa Plc said. Banro Corp., a Toronto-based gold producer, started the Twangiza mine last year, the first new gold operation in Congo since independence from Belgium in 1960. AngloGold, the world’s third- largest producer, and Randgold Resources Ltd. may start production next year from their first mine in the country.

“The age of commercial gold output is restarting,” Philippe de Pontet, director for Africa at New York-based research company Eurasia Group, said by e-mail Feb. 3. Congo was the world’s fifth-largest gold producer in the 1960s, according to Kilo Goldmines Ltd., exploring deposits in the northeast of the nation that’s the size of western Europe.

The gold mines were mainly occupied by artisanal miners from the 1990s when a lack of investment saw the industry collapse. Invasion from eastern neighbors Uganda and Rwanda resulted in military groups seizing control of many of the operations around the same time. At least 3.1 million people died between 1998 and 2007 as a result of conflict, mainly due to easily preventable disease and starvation, according to the New York-based International Rescue Committee.

“Just based on current exploration activities it’ll be somewhere around about a million ounces over the next five years,” AngloGold’s Congo operations manager Brian Kennedy said by phone Feb. 3. Congo could become a significant gold producer in the next 20 or 30 years and “is probably the top geological address,” Kennedy said.

South Africa produced 6.4 million ounces in 2009, according to the Department of Mineral Resources. Randgold, based in Jersey, Channel Islands, last week completed site preparation for construction to start on Kibali, one of Africa’s largest mines, in the Orientale province in the northeast. Production is scheduled to start at the end of next year and could average 600,000 ounces a year. Randgold and AngloGold will each own 45 percent of the venture.

“The biggest challenge is getting things in there,” such as equipment, Kalaa Mpinga, chief executive officer of London- based Mwana Africa, said by phone on Feb. 2. “These gold mines are probably going to be the most remote gold mines ever built in Africa.” The nearest port is Mombasa, Kenya, more than 1,500 miles away through Uganda. Mpinga is looking to start a gold mine producing in about three years to eventually yield more than 100,000 ounces annually.

AngloGold, based in Johannesburg, is also evaluating Mongbwalu in the Ituri district in the northeast, the site of fighting between 1999 and 2003. Banro’s Twangiza could produce 120,000 ounces in its first full year of production. “Apart from Banro, the ramp-up process could be fairly slow, whether due to infrastructure constraints” or security concern, De Pontet said.

Gold’s advance over the past decade has made taking on projects in higher-risk countries worthwhile. The metal gained for each of the past 11 years, climbing to a record $1,921.15 an ounce last year. Bullion traded at $1,746.72 as of 2:51 p.m. in London. “A big part of it is the economics of gold,” Mpinga said. “With the price of gold where it’s sitting today, it’s attractive.”

Congo’s gross domestic product rose 7.2 percent last year, compared with 2.8 percent in 2009, according to the International Monetary Fund. “There’s no reason why we shouldn’t be able to find a number of other world-class deposits here,” Randgold CEO Mark Bristow said at the Investing in African Mining Indaba conference in Cape Town. “Northeastern Congo is the next big gold field for Africa. Congo has a reputation as a wild place, but our experience has been as good as anywhere in Africa.”