UN report on Rwanda fuelling Congo conflict ‘blocked by US’ 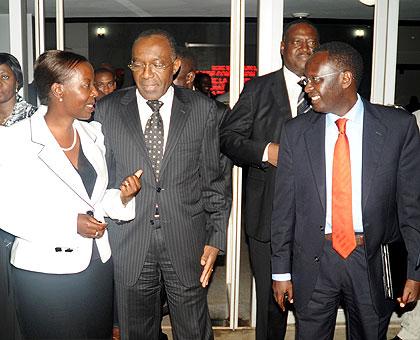 The United States has been accused of blocking a UN report which examines claims that Rwanda is fuelling a violent rebellion in neighbouring Democratic Republic of the Congo.

The Congolese government said the UN group of experts’ report is being stalled by Rwanda and its allies on the security council to protect President Paul Kagame.

Rwanda vehemently denies that it is sending fighters and weapons across the border. Kagame rebuked Congo and said it should take responsibility.

Claims that Rwanda’s military has been aiding a mutiny in eastern Congo led by the renegade general Bosco Ntaganda have been gathering momentum in recent weeks, with a leaked UN report followed by allegations fromHuman Rights Watch.

The UN’s group of experts on Congo submitted its latest report to the security council on Monday, but an annex believed to deal with the Rwanda claim was held back and its publication remains uncertain. Lambert Mende, a Congolese government spokesman, blamed Rwanda and its backers, including the US, for the delay. « I think [the report] confirms everything that has been said, » he told Reuters. « I don’t think the Rwandans are at all happy that it should be officially endorsed by the UN. »

Atoki Ileka, the Congolese ambassador to France and special envoy to the UN, said: « It seems the panel tried to submit the report and annex to the security council. I have no proof but from what I’m told one delegation, which seems to be the US, asked them to delay for two weeks. If it was the US, it would be trying to protect one of its allies, Rwanda. I think that would be a mistake because it would also be protecting Bosco Ntaganda, who is wanted by the international criminal court. »

Ileka added: « There is a risk of the security council losing any credibility. We don’t understand the position of the US. This will do nothing to protect the people of eastern Congo and will not bring stability to the region. The path they are taking is not intelligent. »

Rebel fighters captured in eastern Congo, and interviewed by Congo, Rwanda and the UN peacekeeping mission, revealed a Rwandan network supporting the mutiny, Ileka claimed. « It might go to the head of the Rwandan government. »

Kagame has long been a darling of western donors and Rwanda is almost guaranteed a seat on the UN security council next year.

Congo’s accusation has been given credence by diplomatic sources and international rights organisations.

Philippe Bolopion, UN director of Human Rights Watch, said: « The US government’s reluctance to allow the publication of the UN group of experts’ findings of Rwandan military support for Bosco Ntaganda’s rebels is counterproductive.

« Stifling information will only hinder attempts to put an end to the atrocities committed by ICC (internatinal criminal court) war crimes suspect Ntaganda and other abusive commanders who have joined his mutiny. »

He added: « The US and other security council members should be doing everything they can to expose violations of UN sanctions and the arms embargo, including by Rwanda, and not attempt to cover them up. »

Rwanda has gone on the offensive to counter the criticism. Kagame called on Congo to take responsibility for a surge in rebel fighting rather than blame its neighbour for stoking the violence.

The latest fighting should not be seen as a problem between Congo and Rwanda, but an internal matter between « the different shades of Congolese », he said.

« And you Congolese, don’t run away from your responsibilities and start claiming that this is our problem, » Kagame told a press conference in Kigali on Tuesday.

Rwanda has repeatedly intervened in Congo’s conflicts since Hutu extremists fled there after the 1994 Rwandan genocide. Rwanda has cited the need to hunt down those rebels but has been accused of acting to protect its economic interests in the mineral-rich region.

The UN security council has previously called for a full probe into « credible reports of outside support » for the dissident troops, who deserted from Congo’s army two months ago, many in support of Ntaganda, nicknamed « The Terminator ».