The Guardian – UK : Congo protest leads to over 100 arrests after trouble in London 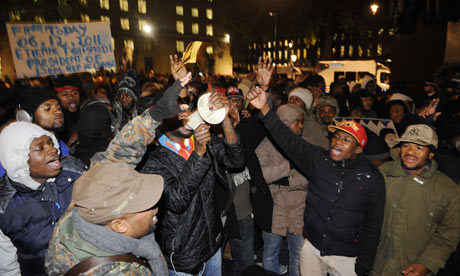 More than 140 people have been arrested at a protest in central London over the bitterly contested elections in the Democratic Republic of Congo.

Police arrested a total of 143 protesters after a group broke away from the main demonstration and began damaging property, including cars and shops, before threatening members of the public.

A Scotland Yard spokesman said the protest had started in Whitehall at around 11.30am after police agreed that a static demonstration could go ahead.

But hours later protesters moved from the agreed location and blocked Whitehall which led to 33 arrests for various offences, including obstructing police and obstructing a public highway.

A breakaway group then moved on to the Trafalger Square area and started causing trouble before being detained by officers. A further 110 people were arrested on suspicion of affray.

The protest came amid rising tensions in the Congo following Friday’s announcement by the election commission that President Joseph Kabila had been re-elected.

At least 18 people were left dead after violence broke out in the African country after it was revealed the president had won another term in office with 49% of the 18m votes cast.

Main opposition candidate Etienne Tshisekedi rejected the official result and declared himself the winner which sparked clashes between angry demonstrators and police, according to witnesses.

The election, held on 28 November, was the country’s first locally organised poll since a war that left more than 4 million people dead. International observers have said the process has been marred by irregularities and disorganisation, but have stopped short of calling for the vote to be annulled.

Kabila, a former rebel leader, first took control of the country a decade ago, after the 2001 assassination of his father, Laurent Kabila, who ruled Congo after overthrowing dictator Mobutu Sese Seko in 1997.

He was then elected president in 2006, a vote which was overseen and organised by the United Nations.