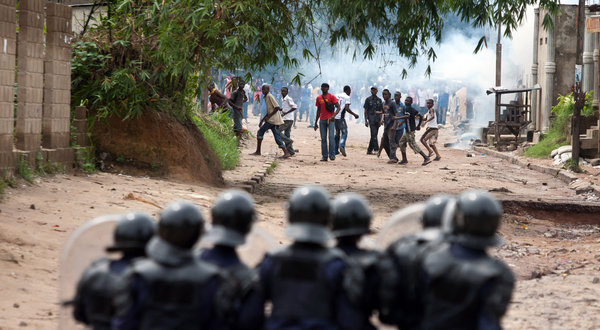 KINSHASA, Democratic Republic of Congo — Today, the big children will eat, Cynthia, 15, and Guellor, 13. Tomorrow, it will be the turn of the little ones, Bénédicte, Josiane and Manassé, 3, 6, and 9.

Of course, the small ones will fuss. “Yes, sure, they ask for food, but we don’t have any,” said their mother, Ghislaine Berbok, a police officer who earns $50 a month. There will have been a little bread for them at breakfast, but nothing more.

“At night they will be weak,” she said. “Sure, they complain. But there is nothing we can do.”

The Berboks are practicing a Kinshasa family ritual almost as common here as corrugated metal roofs and dirt streets: the “power cut,” as residents in this capital of some 10 million have ironically christened it. On some days, some children eat, others do not. On other days, all the children eat, and the adults do not. Or vice versa.

The term “power cut” — in French, délestage — is meant to evoke another unloved routine of city life: the rolling blackouts that hit first one neighborhood, then another.

Délestage is universally used in French-speaking Africa to describe these state-decreed power cutoffs, but when applied to rationing food it illustrates a stark survival calculus, one the head of a household must painfully impose on the rest. And unlike the blackouts, it is not merely a temporary unpleasantness mandated from on high.

“If today we eat, tomorrow we’ll drink tea,” said Dieudonné Nsala, a father of five who earns $60 a month as an administrator at the Education Ministry. Rent is $120 a month; the numbers, Mr. Nsala pointed out, simply do not add up. Are there days when his children do not eat? “Of course!” Mr. Nsala answered, puzzled at the question. “It can be two days a week,” he said.

Though residents here frequently gather on crowded street corners to argue politics, their daily struggle may help explain why the capital did not experience sustained mass demonstrations after disputed election results were announced last month. Sporadic protests and street clashes certainly erupted, but the margin of survival here is simply too slim for most people to demonstrate for very long.

“People in Kinshasa are so poor, they are living hand to mouth,” said Théodore Trefon, a researcher at the Royal Museum for Central Africa in Belgium. “They simply don’t have the means to mobilize for a long time.”

Beyond that, the government leaves little room for expressions of popular discontent. Human Rights Watch said that Congolese soldiers had killed at least 24 people and detained dozens more after the flawed elections that returned President Joseph Kabila to office.

Whatever the city’s misgivings about the vote, daily life itself is enough of a challenge.

“On the weekend, you’ve got to do everything you can to have food because you are at home with the children,” said Mr. Nsala, the administrator. “But there are days, for sure, when we don’t eat. I’ll say, ‘There isn’t enough to eat, so you, maman and the kids, you take it.’ ”

Mr. Nsala, soft-spoken and precise in his diction, stared at the floor of his modest cinder-block, metal-roofed living room. Fuzzy television news played in the background. His wife was selling vegetables out front, to supplement the meager family income. Don’t ask him about meat.

“Maybe, if we make a sacrifice,” he said, pointing out that a pound of beef costs $5.

At the Berbok household — where Ghislaine’s husband, a teacher, earns $42 a month, adding to her salary as a police officer — there has been no fish in a year.

“Délestage. That means: ‘Today we eat. Tomorrow we don’t.’ The Congolese, in the spirit of irony, have adopted this term,” said Mr. Nsala quietly. He added that the family had eaten the day before: “So, today, there is nothing.”

The food délestage is not new in Congo, a country rich in minerals and verdant landscapes yet also one of the hungriest on earth, according to experts. It is last on the 2011 Global Hunger Index, a measure of malnutrition and child nutrition compiled by the International Food Policy Research Institute, and has gotten worse. It was the only country where the food situation dropped from “alarming” to “extremely alarming,” the institute reported this year. Half the country is considered undernourished.

Ten years ago, even poor Congolese could expect to eat one substantial meal a day — perhaps cassava, a starchy root, with some palm oil, and a little of the imported frozen fish that is a staple here. But in the last three years, even that certainty has dropped away, said Dr. Eric Tollens, an expert on nutrition in Congo at the Katholieke Universiteit Leuven in Belgium, where he is an emeritus professor at the Center for Agricultural and Food Economics.

Dr. Tollens blamed the “total neglect of agriculture by the government,” which is fixated on the lucrative extraction of valuable minerals like copper and cobalt. Less than 1 percent of the Congolese national budget, he said, goes to agriculture. Foreign donors finance “all agricultural projects,” he said, and “massive amounts of food” are imported in this rich land, so food is expensive.

“Agricultural productivity is simply gone,” he said in an interview, adding that there was no reason for a lush, fertile country like Congo to be importing 20,000 tons of beans a year.

“It’s worse than Niger or Somalia,” he said, citing two sub-Saharan nations perennially teetering on the verge of famine. “Come on, come on. With so many resources, what’s happening?”

“Before, we ate three times a day; now, we eat by délestage,” said Cele Bunata-Kumba, a tennis coach who lives in the Matongele neighborhood of Kinshasa with his wife and 12 children.

In the immediate term, the street-smart Kinois — as Kinshasa’s residents are known — famous for hustling and adept at the art of survival in a harsh environment, must cope. They must feed their children, the top priority, a number of families said.

In the household run by Elisa Luzingu and her sister-in-law Marie Bumba — Ms. Luzingu’s husband is out of work — the children range in age from 7 to 17. Délestage means no meals, three days a week. “My children are studying, so, it is very difficult,” Ms. Luzingu said.

On the days without food, Ms. Bumba said, the children “will be very tired and hungry.”

On a recent gray Sunday, at least, “everybody eats,” Ms. Bumba said, standing outdoors in the bare courtyard next to a simmering pot of matembele: sweet potato, palm oil, greens and a little fish. There were smiles all around. The food was almost ready.

“The Kinois,” said Mr. Bunata-Kumba, the tennis coach. “For him, eating is day to day.”