Toronto – Today protesters marched down Yonge Street in Toronto’s downtown to protest the killings that are going on in their homeland of the Congo. 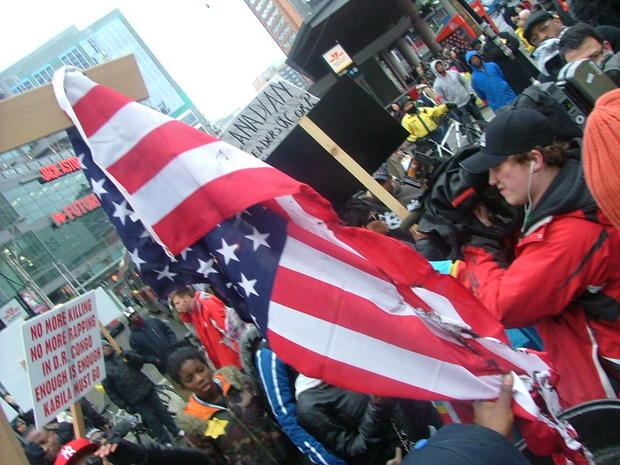 Rallies are being held worldwide for the ousting of President Kabila in the Congo.
At one of the downtown’s major intersections at Yonge and Dundas the Congolese Protest blocked traffic as they spoke out against Congo issues.
Protesters burnt the American flag in the middle of the street. Police who were on the scene said that the act was illegal but did nothing to stop the action.

Congolese protestors started at Yonge/Dundas square at around 11:00 am and were headed to the financial district in Toronto to protest an alleged lack of action by the United States in stopping atrocities in the Congo. Protesters are also concerned about the recent Congolese elections, which according to protesters, were flawed.

Protesters burned an American flag on their way through Yonge/Dundas square. They then burned a Europian Union flag on Queen and Yonge street. Police formed a line at Bay street and Wayne Ave diverting the protest planned for the financial district. The protest escalated when protestors rushed the U.S. consulate. Police concern arose as several children were spotted in the crowd within close proximity of the horses.

RCMP passed the crowds multiple times to ensure they dispersed. No injuries or arrests have been reported.