TORONTO : Film Screening of « Crisis in the Congo… » 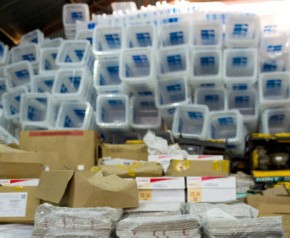 Crisis in the Congo: Uncovering the Truth

The documentary “explores the role that the United States allies, Rwanda and Uganda,  have played in triggering the greatest humanitarian crisis at the dawn  of the 21st century.“

Panel Discussion: Solidarity, Justice and Peace in the Congo

Bodia Macharia, president, Friends of the Congo, Canada & Ph.D.  candidate (University of Toronto): « Advancing public education and  solidarity with the Congo » – Ameth Lo, organizer, Group for  Research and Initiative for the Liberation of Afrca (GRILA): « Toward an  effective Pan-Afrikan international solidarity practice »

Message from The Network for Pan-Afrikan Solidarity :

We  will focus on issues that deal with the material realities of the  community and open a space for dialogue and commitment to year-long and  ongoing organizing, mobilizing and education around the subjects raised  in the films and the panel discussions. We will use this gathering to  reach out to Toronto’s Pan Afrikan community with the goal of advancing a more progressive political agenda for the material and socio-economic  emancipation of all Afrikan peoples.

We look forward to seeing you at the Afrikan Liberation Month Film Series! Free public event – donation will be accepted Event is wheelchair accessible Sponsored by the Pan-African Solidarity Network (University of Toronto) Co-Sponsored by CUPE Local 3907 For further information, please contact the Pan-African Solidarity Network (U of T) at network4panafrikansolidarity@gmail.com.