The importance of Congo Basin for global climate & biodiversity 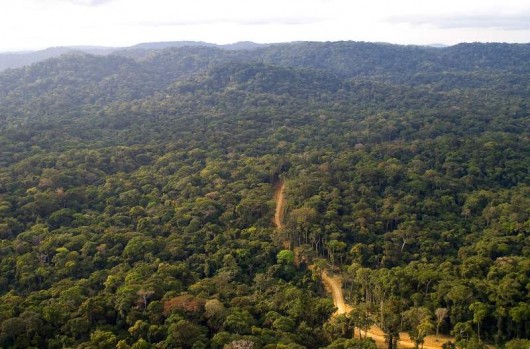 The ‘State of the Congo Basin Forests 2010’ report launched in Douala, Cameroon, at the Annual meeting of the Congo Basin Forest Partnership (CBFP), provides a comprehensive and detailed assessment of the status of this crucial pool for climate regulation and natural resources. It looks at deforestation patterns, points to trends in sustainable forest management and highlights threats to biodiversity.

The Congo Basin, which spans over six countries (Cameroon, Central African Republic, Congo, Democratic Republic of Congo, Equatorial Guinea and Gabon), contains 25 per cent of the total carbon stored in tropical rainforests worldwide. The report explains the important role the Central African countries can have in future climate conventions and in particular in the negotiations on Reducing Emissions from Deforestation and Forest Degradation (REDD). The low deforestation rates measured here with satellite imagery (0.1 per cent per year for the period 1990-2000 and 0.2 per cent per year for the period

2000-2005) are far below those observed in Latin America and in Southeast Asia and make the Congo Basin a possible role model for other tropical forest regions.

The report also outlines that further efforts are needed to protect the habitat of many animal species. Central African countries have developed a dense network of protected areas and established national plans to reach the target of the Convention on Biological Diversity, i.e.17 per cent of the land under protection. However, the lack of long-term management strategies still represents severe threats to the population of big mammals (elephants, gorillas, chimpanzees, bonobos, and okapis). The industrial poaching of elephants for ivory accounts for 70per cent of the total illegal trade and has cut in half their population in the Democratic Republic of Congo.