Source: The Mercury. Published on February 17 2012 . By Lungelo Mkamba 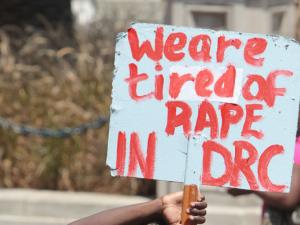 Fed up with “unfair” and “unlawful” treatment by the Department of Home Affairs, about 400 Congolese nationals protested and toyi-toyied at the Durban City Hall yesterday. They had a memorandum addressed to mayor James Nxumalo.

Emmanuel Emmix, a spokesman for the Congolese community, said arrests – which Home Affairs in Moore Road have been making since November – were unlawful. The most recent arrests were of two people on Wednesday.

“We have been quiet for too long. It is time we took action and approached the mayor to help us. We really do not understand why people are being treated unfairly,” he said.

“Today (yesterday) we made our children miss school because this affects them as well.”

According to Emmix, the biggest concern they had with Home Affairs was when trying to renew their permits to be in the city and country.

“The officials ask us for bribes of R7 000 or they arrest and deport you. If one does not have that money then deportation is imminent.”

The protesters sang songs and toyi-toyied peacefully, monitored by police. Some of the posters read: “Where is the human rights? Our country (Congo) is not safe. Where is the Ubuntu? Let’s find a solution peacefully.”

According to the memorandum, which was received by Belinda Mhlongo of the municipality, the people are afraid to go back to Congo.

“Being deported is equal to death by the ruler (Joseph Kabila),” said Emmix. “The army is killing people as people kill mosquitoes. We appeal to the mayor to find a solution to the problem of the arrests.”

Municipal spokeswoman Sindy Mtolo said the protesters’ issues would be taken up with the Department of Foreign Affairs “based on memorandums of understanding and in terms of relationships with their country”.

Home Affairs spokesperson, Manusha Pillai, had not got back to the Mercury with a comment by late yesterday.