Kambale Musavuli on the Genocide in Congo & the US (Black) Leadership 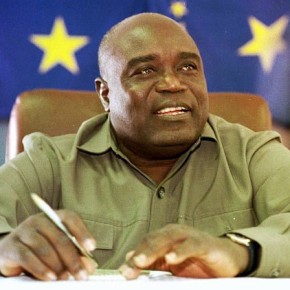 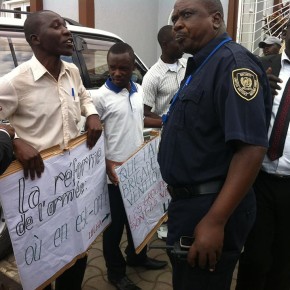 Kambale Musavuli was invited to this BAR TV to discuss the genocide in Congo and the US black leadership.

Black Americans have failed to use their political power to relieve the suffering of people in the Congo and elsewhere in Africa, said two spokespersons for Friends of the Congo. « Today, we have Black leaders who are in high positions, who could do something to stop the suffering of Blacks in Africa, » said Kambali Musavuli, student coordinator for Friends of the Congo. Instead, Musavuli told Black Agenda Television executive editor Glen Ford, « we have Black faces here providing cover for dictators in Africa, and no one is challenging them for that. »
United States Ambassador to the United Nations Susan Rice « is watering down UN reports documenting atrocities » committed by Rwanda and Uganda in the Democratic Republic of Congo. « Can you imagine, » asked Musavuli, « how difficult it is for me as a Congolese to share with the American people the policies she is making that are causing the suffering of Black people in Africa, specifically in Congo? »

U.S. policy has contributed to the deaths of six million people in Congo — the worst genocide since World War Two — since Uganda and Rwanda first invaded the mineral-rich country, in 1996. « These leaders have the blood of millions of Africans are their hands, » said Friends of the Congo co-founder and executive director Maurice Carney. « U.S. policy is presenting these war criminals, who have committed crimes against humanity, to the world as renaissance leaders of Africa. »

Uganda and Rwanda, close allies of the United States, control much of the mining regions of eastern Congo, the source of strategic metals such as coltan, which is vital to the electronics industry.

« In order for us to have our cell phones, our laptops, our DVD players, six million Congolese have to die, » said Musavuli. Half the dead are children under the age of five. « So we have three million children that had to die so that our phones can vibrate, so that we can watch TV, so that we can use our game consoles, because we are benefiting from the suffering of the Congolese. »

Late last year, a host of African American politicians and organizations voiced unqualified support for UN Ambassador Rice when she was a contender for the Secretary of State job, despite her role in the Congolese genocide. Asked what this said about the actual state of Black American relations with Africa, Musavuli replied: « I believe we’ve lost what Dr. King and others fought for, that injustice anywhere is a threat to justice everywhere. The lives of Black people around the world are devalued. »

« Barack Obama is set to go down in history as the president who’s already done more to dismantle, destroy and privatize public education than any president before him, » said Black Agenda Report managing editor Bruce Dixon. « The current nationwide wave of public school closings and teacher firings, which are concentrated in poor and nonwhite communities across the country, is directly traceable to President Obama’s Race To The Top Program » said Dixon, in a commentary for Black Agenda Television.
Black teachers have borne the brunt of school firings. « Tens of thousands of experienced teachers have been run out of the classrooms, » said Dixon. Secretary of Education Arne Duncan is the former CEO of the Chicago public schools. « Duncan fired so many veteran black Chicago teachers to fill their slots with mostly white rookies, that teachers sued him for racial discrimination in federal court and won, » said Dixon, a Chicago native. Obama’s « signature education policy » is actually a corporate blueprint « drawn up by the Bill & Melinda Gates, the Eli Broad, Boeing, Walton Family and other foundations. »

The traditional Black organizations have recently been going through the motions of framing a Black political agenda. However, most of their talking points could have come straight out of the Obama White House. « That’s how the Black Misleadership Class plans to waste the next four years: pretending to be getting ready to finally make some demands or even rev up a Movement » — when February 30th rolls around.