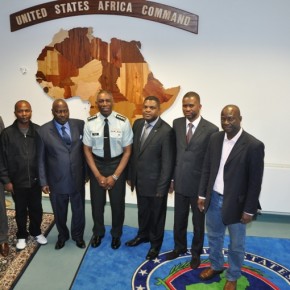 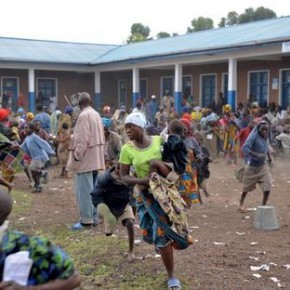 In order to understand the failure of mobilization in the Congo, we need to look beyond the usual finger-pointing at individuals. Modern Congo does not have broad, cross-cutting constituencies like labor or Islamist movements; grassroots mobilization retains a sharp ethnic character; and business and the media are heavily influenced by the state… The key challenge lying ahead for the country is not just how to reduce corruption and combat impunity. It is also a structural challenge: how to build the social capital that will be able to make these efforts sustainable. 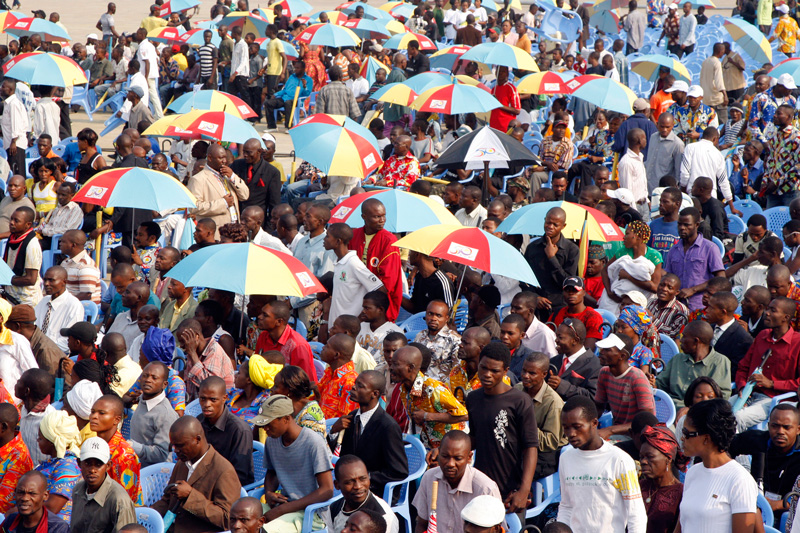 In the run-up to last November’s presidential elections in the Democratic Republic of the Congo, Cassandras were easy to find on the streets of Kinshasa. “Ça va péter,” a parliamentarian told me, “It’s going to blow up.” It wasn’t hard to see why. Both the incumbent Joseph Kabila and his main opponent Etienne Tshisekedi toasted their victories before the polls even took place. It was clear neither was going to accept defeat.

This rhetorical jousting translated into unrest on the streets. In the months running up to elections, Tshisekedi had at times been able to mobilize upwards of 50,000 people in the streets and soccer stadiums in the capital of Kinshasa, as well as in other major cities around the country. The battle for the presidency appeared to be switching venue from the ballot box to the streets.

When the polls were marred by massive fraud—ballot stuffing, corrupted voter lists, “disappeared” votes—and Kabila was declared winner with 48 percent of the vote, many thought we would see large-scale unrest in Kinshasa.

And yet, it did not, or at least not in a way that would destabilize the regime. Over the following months, the opposition and Catholic Church tried to convert popular frustration into mobilization, but were thwarted by police repression. What were the differences between the streets of Limete and Tahrir Square, between the Congo and Tunisia? Understanding this will help us decipher why there is such a poor record of sustained, non-violent mobilization in the Congo in general.

Scholars disagree on the exact ingredients that go into a strong social movement, but there is a very rough consensus on some key points that are worth repeating here. First, grievance is not enough to spark an uprising. As academics from James Fearon to Jack Goldstone argue: suffering does not a revolution make. The majority of the downtrodden, poor, and hungry people in this world are not picketing and protesting. A quick glance at the bottom twenty countries in the Human Development Index suggests that none have substantial non-violent movements capable of challenging the government.

It is not so much static suffering that appears to prompt action, but changes in society—and not always changes for the worse. As Tocqueville famously wrote about the French Revolution, “It is not always when things are going from bad to worse that revolution breaks out. On the contrary, it more often happens that, when a people which has put up with an oppressive rule over a long period without protest suddenly find the government relaxing its pressure, it takes up arms against it.” Indeed, scholars have pointed out that many revolutions are preceded by an increase in prosperity, not abject misery.

Secondly, the condition of the elites is just as important as that of the masses. If the elites are united and the state strong, they will be largely invulnerable to challenges. The French Revolution took advantage of a profligate state in crisis after years of overspending on wars. The Civil Rights movement in the United States benefitted from the turbulence caused by the demise of King Cotton and the subsequent urbanization of the black population in the South. In other words, challenges to the status quo seem to require dissenting factions from the elite to link up with popular protests. Even the peasant rebellions of Latin America and Asia required these cross-class linkages; Fidel, Mao, and Ho Chi Min were all able to make these linkages between intellectual elites and disgruntled masses.
Lastly, people do not mobilize in a vacuum. Social movements rely on strong networks with clear goals to overcome collective action problems, whether these are religious groups, student collectives, or labor unions. As sociologist Douglas McAdam pointed out in his study of Freedom Riders in the segregated American South, it was largely personal connections and organizational membership that determined participation, not ideological affinities. These networks need to demonstrate a mixture of reciprocity and trust, on the one hand, and strong internal organization on the other. All of these kinds of networks were on display in the recent protests in Tunisia and Egypt.

Et le Congo, alors? On the face of things, the Congo ranks high on many of these revolutionary indicators. While it has seen little increase in prosperity in recent years, it has been undergoing a social and political transformation with a turbulent peace process. In particular, the recent elections provided exactly the kind of raised expectations followed by abrupt repression that Tocqueville thought were so explosive. As for the Congolese elites—they could hardly be more divided or fractured, and the state is certainly not fiscally or militarily very sound. Finally, the past decade has seen the exponential growth of civil society and political parties, providing the kind of networks that social movements thrive on.

So why did Kinshasa not have its Tahrir moment?

Perhaps the Congo can teach us something about mobilization, and vice versa. Here, divided elites fail to link up with popular protests; social movements fail to galvanize extant civil society networks.
Part of the reason for this lies in the historical relationship between the state, elites, and civil society. The state under Mobutu labored to prevent cross-cutting alliances from emerging, both among elites and within civil society. Coming on the heels of a repressive Belgian state, Mobutu’s Mouvement populaire de la révolution party colonized labor unions and student groups and repressed independent organizations and political parties. Fragmentation became the name of the game; he worked hard to prevent elites from establishing independent support bases or for his officials from remaining in an office or province for too long. In his later years, Mobutu encouraged local ethnic feuds in a bid to divide and rule. It was a strategy dubbed pyromane-pompier: lighting fires just to show everyone how indispensable you are as a fireman.

When political space was opened up in fits and starts in the 1990s, and then after the hiatus of the 1996-2003 wars, mobilization was fragmented and heavily dominated by local and ethnic issues. The state was not seen as a source of public service provision—indeed, it had scant record of providing goods—but rather a trough at which different patronage networks fed. While this patronage benefited only very few, it dominated the logic of mobilization.

This brings us to the recent elections. Electoral mobilization was largely fueled by short-term, often financial incentives—politicians paid people to show up at rallies or distributed T-Shirts and beer. The main exception was the opposition party Union pour la Démocratie et le Progrès Social, to which many rallied out of party loyalty and genuine outrage with the government. However, little was done outside of some major cities to cement these networks by organizing and civic education. Thus, while Tshisekedi was able to rally tens of thousands of people to his speeches, he relied too much on his own legendary stature and not enough on the nuts-and-bolts of community organizing and grassroots mobilization. He has also struggled to shake the perception that his party is dominated by the Luba community, which has tense relations with other ethnic groups in the capital and elsewhere.

Mobilization is multi-faceted, and other factors also impeded large-scale demonstrations or unrest. The student and labor unions that form the hub of resistance in other countries are internally divided in the Congo, with parts of their leadership co-opted by the government and other factions disillusioned with Tshisekedi. When the government decided to escalate its tear-gassing and bully-clubbing of protesters after the elections, few networks had the strength to overcome these repressive tactics. Even the Catholic Church, which has been vociferous in its criticism of the polls, faced internal divisions and resistance from the Protestant and Kimbanguist communities, whose leaderships are sympathetic to the government.

The situation among the elites is also not conducive for persistent mobilization. Unlike some other countries on the continent—Kenya, Ghana, and Nigeria are budding examples—in Congo there is little evidence of an independent business and middle class emerging with a common interest in pushing back against corruption and abuse. Business is largely subservient to the state—in order to prosper as an entrepreneur, you have to have connections in government. Instead of banding together to oppose corruption and excessive taxation, businessmen mostly look out for their own interests.

Political parties are also often fueled by narrow agendas. Most of the hundreds of parties are somnolent for the five-year electoral cycle and only come alive—with their flags popping up in rural areas, offices being opened in cities—in election years. There are almost no policy differences among the majority of these parties—at least, not that matter to the public—and voters pick their candidates largely based on the personalities, ethnicities, and reputations of the party’s leaders. This splintering of the political arena has been compounded by the electoral system of proportional representation, along with the incumbent’s electoral strategy that privileges the proliferation of political parties.

Thus, in order to understand the failure of mobilization in the Congo, we need to look beyond the usual finger-pointing at individuals. This is not just a story about the relative merits of Kabila and Tshisekedi, about a spineless international community and abusive police forces. This is also a story about the fragmentation of the political sphere, the lack of broad alliances that can galvanize a social base. Modern Congo does not have broad, cross-cutting constituencies like labor or Islamist movements; grassroots mobilization retains a sharp ethnic character; and business and the media are heavily influenced by the state.

I do not mean to downplay the many courageous individuals and organizations in the Congo that have tried to lobby for their rights. There are indeed many of them. But the key challenge lying ahead for the country is not just how to reduce corruption and combat impunity. It is also a structural challenge: how to build the social capital that will be able to make these efforts sustainable.