Kambale Musavuli on Congo Youth, repression and the role of the USA in DRC 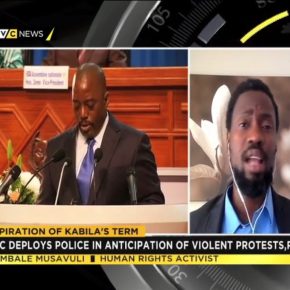 Friends of the Congo’s Kambale Musavuli says the fate of Congo’s democracy hangs in the balance, on The Real News Network.

JAISAL NOOR: Protestors in Kinshasa rallied Monday as they demanded that Democratic Republic of Congo President Joseph Kabila step down when his second term in office expires at midnight. More protests are planned for Tuesday. Opposition activists say Kabila is trying to cling to power by letting his term run out without an election in place to choose his successor. The government and election officials say the ballot must be delayed until April 2018 because of logistical and financial problems. But the main opposition block rejects the deal to delay the election as a ploy. The government has blocked most social media and outlawed protests in the capital, Kinshasa, and has rolled out a heavy security presence raising fears of more violence in a nation that has been plagued by war and instability for decades. Dozens have been arrested. Congo has not seen a peaceful transfer of power since independence in 1960. We reached Kambale Musavuli, spokesperson for Friends of the Congo who has been closely following developments in the DRC from the United States.

KAMBALE MUSAVULI: Security forces have been everywhere in key neighborhoods, blocks, pretty much doing patrol and intimidating the population and then, from there, this morning they were very visible in most of the major neighborhoods where young people mobilize. Pretty much we didn’t have the numbers that we expected to come out because the military was out in full force, blocking people from actually protesting. We probably had hundreds of people who came out today in the major cities. But outside of that, too, understanding the fear that they have put in the population, the terrorism of this government, is that last week the police commissioner in the capital city of Kinshasa, his name is General Kanyama, made a public statement on national TV where he stated a message to the protestors that, « When you come out on Monday make sure that you look at the picture of your mother and a picture of your father because this may the last time that you will see them. » He’s been sanctioned by the United States so far, which we think is quite a timid action, while we applaud it but we still hope that there can be sanctions also, much more on the regional players Rwanda and Uganda as well. But, that’s what the Congolese people are facing right now, that they are facing a regime that have guns and the protestors have the will to fight. And that will be the exchange that we’re going to be seeing unfolding in the next few days in which to come.

The largest story is the story of the people. Everyone is discounting the youth, everyone thinks that they can’t see the light in the situation. Kabila literally wants to stay in power, and the fact is, he will still be the President of the Congo tomorrow, according to him. But the people are saying, Starting tomorrow, we dont have a President in the Congo. And that we are repressed today, we are going to be repressed tomorrow. The IU groups are clear. They are clear that this is going to be a longer process than we expected, but they are ready to fight, you know, its like, the line has been drawn in the sand where Kabila says, « I’m here. So what will you do, Congolese people? » And the youth is on the front line where they’re being arrested and being jailed and being killed. And the reason why is they’re afraid of these youths. Over 60% of the population is under the age of 35. They are very, very clear that we have no future or hope with the current regime and we want something different. And one can predict across the Congo there will be much more instability because of the fact that the President of the Congo is disrespecting the Congolese Constitution, which means that he’s disrespecting Congolese Constitution as a whole, but the people of the Congo will disassociate themselves from the democratic process because they will not trust in the institutions of this country anymore.

So when that takes places, at least what I’m seeing and hearing from the youth on the ground, is that they are going to engage starting December 20th until Kabila completely leaves the country — they will engage in civil disobedience all across the country. So that’s what we’ll now see, which power will win. I’m on the side of the power of the people. The Congolese people, the youth who have been engaged in civil disobedience, riding the streets, we’ll win at the end but they will need support from the outside, speaking specifically of solidarity support of those who want to see Congo emerge from their shambles under the yoke of dependency that we’ve had of the wars and all the ills that we have had for the past two decades, which is really a result of US foreign policy.

JAISAL NOOR: We also asked him to respond to a recent major investigation by Bloomberg and the Pulitzer Center titled, « With his family fortune at stake, President Kabila digs in. » The article finds that Kabila has enriched his family to the tune of hundreds of millions of dollars while many Congolese live in poverty.

KAMBALE MUSAVULI: Kabila is no angel. I mean, this is not new information for the Congolese people, maybe for the documentation from Bloomberg. Bloomberg is validating Congolese, what we’ve been saying for decades — hes been around in the DRC as the President for 16 years now. Kabila has been, from day one, accumulating wealth. It is surprising that now that the United States is intending to remove Kabila, they’re not on the same side anymore, that this information is coming to light. So I would not just be very harsh on Kabila since … speaking about the wealth that he has and the 70(?) companies that he has, the many permits that he has, I would be much more critical of people who have enabled him to do so. He has visited the United States many times, he has met both Presidents many times, he has business interests in the United States. We do know that the Israeli businessman, Dan Gertler, has helped him tremendously to gain investors in the West to buy some of the rights of those mining concession and so on. And then just lately there was a report that the Justice Department is funding a hedge fund in New York $400 million for bribery. What people fail to realize about this case is this hedge fund work with Israeli businessman Dan Gertler, represented them and they are the ones — specifically the hedge fund — they bribed Congolese politicians to get access to the mines. So the network has a limited setup to the 70 companies with Kabila, it’s much more international than that. It’s a great thing that we’re exposing this network at this time. It’s quite sad after 15 years and millions of deaths in the DRC and many centuries of suffering in this country, that now he is presented as the bad person — which is true, he is — but we are still waiting for US citizens who have enabled him in power. The lobby firms who are supporting him and providing access to Washington, the investors who also have put money in these illegal activities, when will we have a report on that? When will we have these very specific reports that denounce them? But it’s no surprise to us — it’s just confirmed what has been known for years and is now for public consumption.

JAISAL NOOR: For The Real News, this is Jaisal Noor. 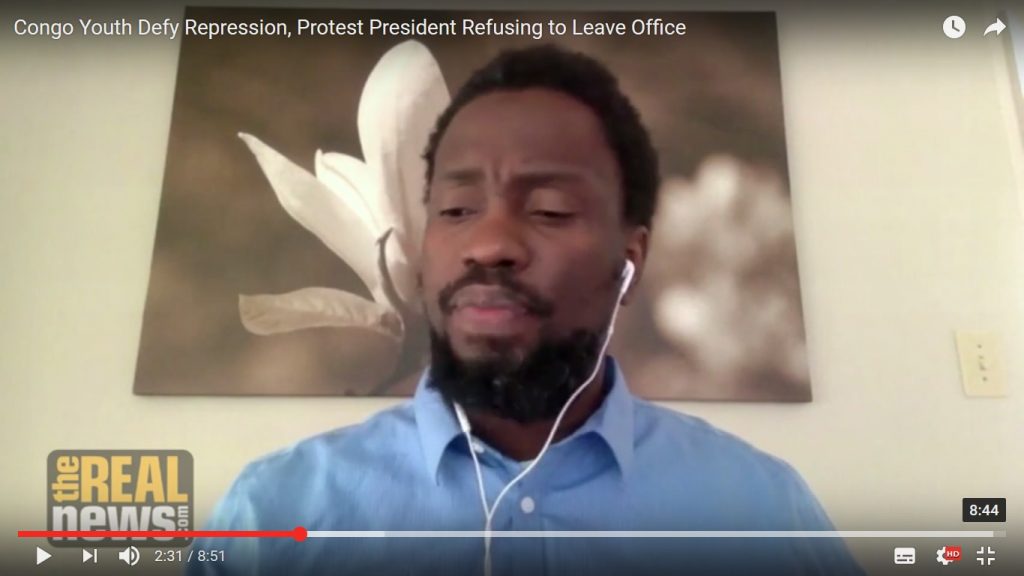