Rwanda, Congo and the M23: Explaining violence in the Eastern DRC

Fred Robarts, former member of the UN Group of Experts on DRC 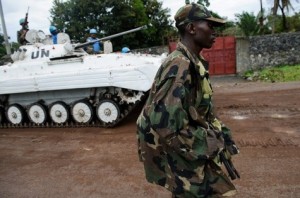 The M23 rebel movement, or Mouvement du 23 Mars, is the latest focus in Congo’s cycle of violent insurrections in the East of the country. It has been fighting the government’s Armed Forces (FARDC), largely in North Kivu Province, since a mutiny within the Congolese army in April.

Following a report by the UN panel of experts on the DRC, Rwanda and Uganda have been accused of supporting the movement. In the case of Rwanda, James Kabarebe – the country’s Minister of Defence – has been mooted as M23’s de-facto leader, allegations which are strongly denied.

While the DRC is bearing the brunt of the current conflict, thousands of refugees have crossed the border in to Uganda and some international donors have cut or cancelled aid to Rwanda. In the UK, former Secretary of State for International Development Andrew Mitchell has been criticised for his decision to sign off £8 million worth of aid to the Rwandan government before leaving office.

Our panel of experts will shed light on the current situation, offering in-depth analysis of the historical tensions between Kinshasa and Kigali, the many drivers of conflict in Eastern Congo and the wider regional implications.

We will be looking to answer questions, such as: What are the main grievances of the M23 rebel movement? Do Rwanda and Uganda have vested interests in the conflict? Does M23 change our view of Rwanda as a ‘model democracy’? And what does the movement mean for the already weak Congolese state and the fragile government of Joseph Kabila? Lastly, what should be the role of the UN and other international actors?