A British writer has condemned the UK government for financing the mounting humanitarian crises in the Democratic Republic of Congo, where the civilians have remained the victims of mass killings, severe torture, and widespread rape. 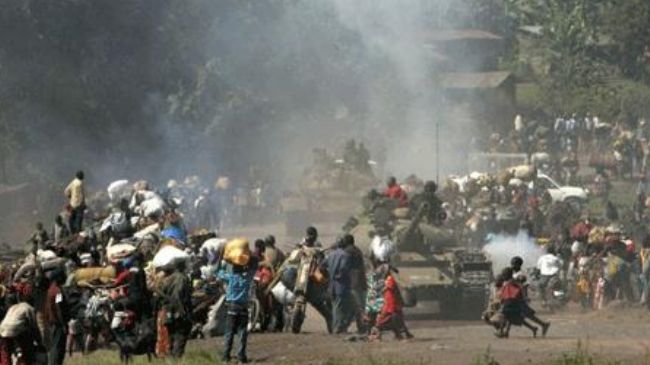 The British government and media have turned a blind eye to the sever crisis taking place in the central African nation, because “the crisis in Congo is of no interest to UK government and media, and surprisingly they are happy with the violence occurring in the country,” Judith Ammanthis told Press TV in a phone interview.

She also criticized the media for imposing a news blackout on the latest protest of Congolese community in Britain who shouted against the silence of British government about Congo « corrupt election » results and crisis in the conflict-hit country.

“UK media and particularly BBC have effectively followed the interests of UK government, that is apparently pleased with the bloody conflicts of Congo,” she added.

President Joseph Kabila has been strongly supported by the western governments, as his People’s Party for Reconstruction and Democracy was responsible for militarizing the mining industry, and continued to sell off the Congolese owned mining assets to western firms, specially to UK-based mining company, Eurasian Natural Resources Corporation, that has profited greatly from the situation in Congo.

As long as the British firms are exploiting the country’s oil and minerals including tin, tantalum, tungsten, Britain will ignore the humanitarian crisis such as child labor, slave labor, mass rape and the massacre of children, she also stressed.

“It’s quite scandalous that UK government has not addressed the Congo crises, but it is very transparent why this is happening, because it is of no interest to them whether people die or don’t die, they only consider UK’s financial interests in the region,” Ammanthis added.